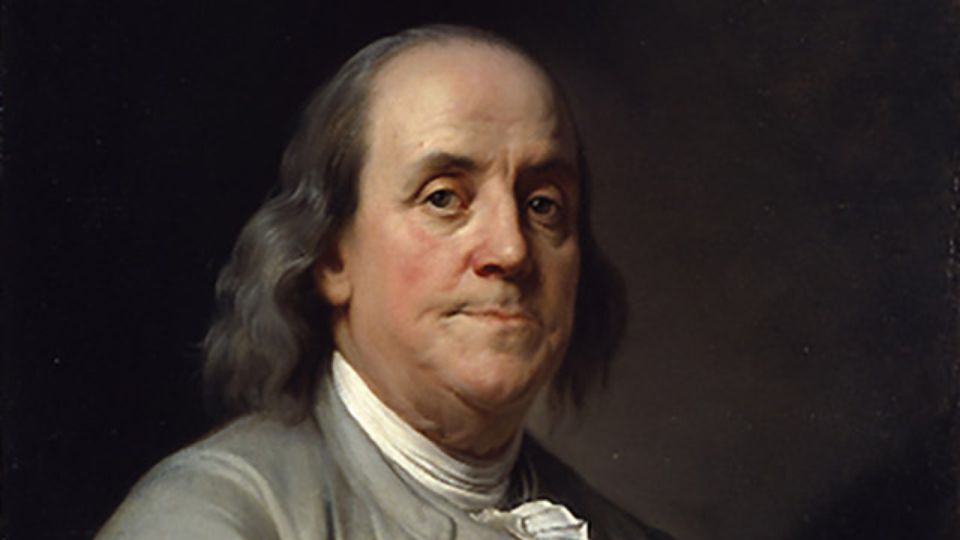 I drive an old Jeep. I’ve had for it twelve or thirteen years now. Driving an old vehicle means that I take a lot of trips… to the mechanic and they start becoming more and more frequent. This last time had me at the breaking point. I wondered if I should just junk the thing and get this over with. I consulted my inner-Ben Franklin.

I do this a lot. I have an old worn out copy of Ben Franklin’s autobiography — I know, how quaint. I’ve read it countless times. I keep a copy of it on my iPad just in case as well. I’ve found it a useful guide on how to live right. Of course, I disagree with him all the time, but it doesn’t take away from the overall quality of the work.

In the book he lists thirteen virtues, number five being frugality. After consulting Franklin on this and doing some quick math in my head, I decided it was still a better deal to keep the Jeep for the time being. I was stressed over the ordeal and all the work I had on my schedule. I needed to get out of Los Angeles for a few days to get my head on straight. I get depressed when I see nothing but strip malls, tattered palm trees and stucco decaying in the smoggy sun, day after day — the leaf blowers raging, horns honking, some guy on a really loud motorcycle that absolutely nobody thinks is cool, save for himself. I had to get out.

I thought about Philadelphia, the place where Franklin finally had decided to run his business and make his home after leaving his birthplace of Boston and doing a stint in London. I had a friend there I could stay with and after checking in with her about it and finding some dirt cheap plane tickets, I was off to Philadelphia.

I’ve been having nightmares of plane crashes since I was a little kid. I’m usually watching them fall out of the sky and exploding, but sometimes I’m in the plane and it feels incredibly real. The problem is augmented by the fact that I like to watch TV documentaries on plane crash investigations. It’s always some stupid little thing that goes wrong and then everyone dies. Some sensor breaks off or something and before you know it, the plane is going down and nobody knows what’s happening, people scream and then bam! So flying makes me nervous.

I like to read several books at a time, but I kept Franklin close by to help ease my anxiety. I first read Franklin’s autobiography when I was around eleven years old. I wasn’t assigned any work on Franklin or anything, I doubt I would have bothered to look at the book if I were actually being made to read it. I never actually checked the book out. I just kept going back to the spot where it was when I had free time and read what Franklin had to say about the world. It felt like reading the stories and advice of a wise old uncle. That’s kind of what he is — America’s wise old uncle.  I was flying to go visit the hometown of my wise old uncle, to be there with his ghost. To stop and take a breath, reflect and move forward.

Philadelphia was lovely. Not even the harsh February wind could put a damper on it for me. My friend whom I stayed with was an extremely gracious host. She brought me around to some great restaurants, the absolutely fantastic Mutter Museum — a medical museum, which was like a dream come true for me — and the Philadelphia Museum of Art, which has me judging the art museums here in LA super hard. The next day, she fell ill and I was left to my own devices, which is something I’m more properly equipped for anyway. I’m used to exploring cities around the world solo, so I jumped at the chance to see everything for myself. I went off to see where Franklin’s house and print shop had stood.

The original house had been demolished some time in the nineteenth century. It made me wonder what these people in the nineteenth century were thinking or what happened, but I still haven’t got a straight answer. There was a tourist museum underneath the monument of where the house had stood, but I opted to not go in there. I abhor tourist spots. I was unsure if I could glean anything useful or informational out of the experience, so I opted to take a seat for a minute, think about where I was and what got me here in the first place.

Franklin made his money in the printing industry. He saw plenty of good times and bad times, but there was a kind of resilience in him that seemed almost unshakable. No matter what life threw at him with his printing endeavors, he went with it and made the best of it. At his core, I believe were his thirteen virtues which he lists in the autobiography.

“It was about this time I conceived the bold and arduous project of arriving at moral perfection. I wished to live without committing any fault at any time; I would conquer all that either natural inclination, custom, or company might lead me into. As I knew, or thought I knew, what was right and wrong, I did not see why I might not always do the one and avoid the other. But I soon found I had undertaken a task of more difficulty than I had imagined. While my care was employed in guarding against one fault, I was often surprised by another; habit took the advantage of inattention; inclination was sometimes too strong for reason. I concluded, at length, that the mere speculative conviction that it was our interest to be completely virtuous was not sufficient to prevent our slipping, and that the contrary habits must be broken, and good ones acquired and established, before we can have any dependence on a steady, uniform rectitude of conduct.”

Temperance
Eat not to dullness; drink not to elevation.

Silence
Speak not but what may benefit others or yourself; avoid trifling conversation.

Order
Let all your things have their places; let each part of your business have its time.

Resolution
Resolve to perform what you ought; perform without fail what you resolve.

Frugality
Make no expense but to do good to others or yourself, i.e., waste nothing.

Industry
Lose no time; be always employed in something useful; cut off all unnecessary actions.

Sincerity.
Use no hurtful deceit; think innocently and justly, and, if you speak, speak accordingly.

Justice
Wrong none by doing injuries or omitting the benefits that are your duty.

Moderation
Avoid extremes; forbear resenting injuries so much as you think they deserve.

Cleanliness
Tolerate no uncleanliness in body, clothes, or habitation.

Tranquillity
Be not disturbed at trifles, or at accidents common or unavoidable.

Chastity
Rarely use venery but for health or offspring, never to dullness, weakness, or the injury of your own or another’s peace or reputation.

On the actual practice of following the virtues, Franklin writes:

“My intention being to acquire the habitude of all these virtues, I judged it would be well not to distract my attention by attempting the whole at once, but to fix it on one of them at a time, and, when I should be master of that, then to proceed to another, and so on, till I should have gone thro’ the thirteen; and, as the previous acquisition of some might facilitate the acquisition of certain others, I arranged them with that view, as they stand above.”

I’m not going to sit here and explain to you how you should incorporate these into your life. You may not even value any of these virtues  yourself and that’s fine. Franklin claims he never mastered them in his lifetime, and mastery is also not really the point. The point of something like this isn’t really to ever achieve perfection, but to always be working toward it. The act of practicing it is worthy enough.

The only one I have a real problem with here is chastity. I give it a pass, because it was conceived in the middle of the eighteenth century, but it’s nothing I can hold up as a personal virtue. The rest of it I hold dear and have taken on as my own. I’ve replaced chastity with wellness — as in fitness and nutrition. A proper workout and diet plan that you can live with for the rest of your life. In Book III of Plato’s Republic, the concept of a fit body being just as important as a fit mind is discussed, so I’ve taken this on in personal philosophy.

Also, I’ve found the list of virtues doesn’t really allow for much in the way of actual fun. The whole thing springs from a very puritanical view of the world. Though it’s quite apparent Franklin did have a great sense of humor,  judging by his penning of the essays, Fart Proudly and Advice to a Friend on Choosing a Mistress. Fart Proudly being written while he worked as Ambassador to France, as a response to the call for scientific papers from the Royal Academy of Brussels. Nobody ever quite figured out if Advice to a Friend on Choosing a Mistress is meant to be serious or not, but it is pretty explicit for its time, far from puritanical.

Despite my problems with the virtues, they’re here, memorized in my head. I called them all out to myself as I walked around the places where Franklin used to frequent and where he started the first free library in the United States. I walked along and consulted his ghost along the graves and memorials of so many dead people from all the ages before me. I ignored the cold. I kept walking along thinking, “justice, silence, tranquility, order, cleanliness, sincerity…” I added kindness and humor in there. I felt thankful for being able to make this little pilgrimage to consult the ghost of my childhood hero. I felt pretty wise in spite of myself. And so I went back to where I was staying and went early to bed — as the saying goes — so I could be early to rise, so I could catch my plane back to where I live — recharged and ready to go.