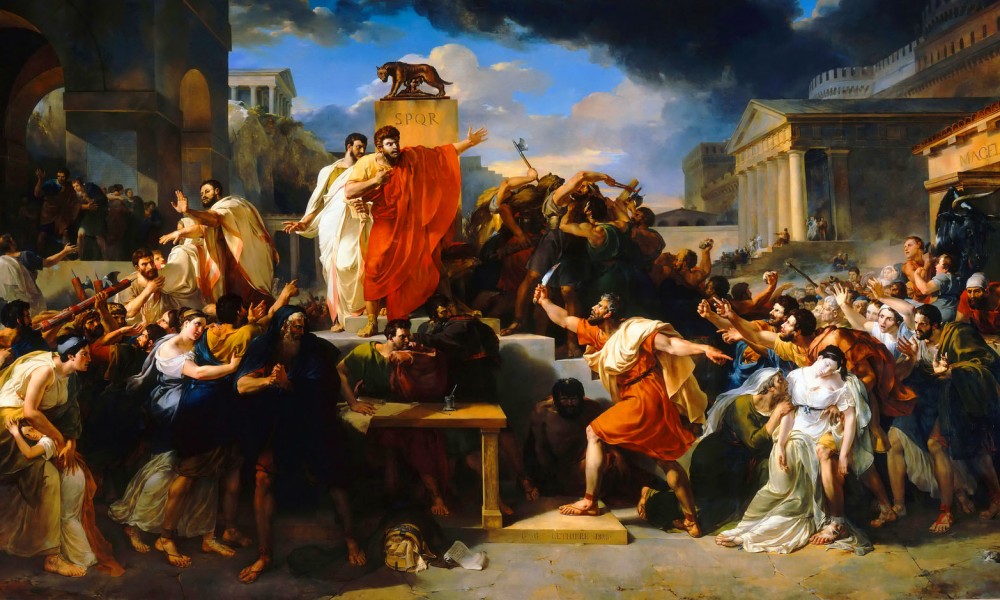 Our classics and great traditions are a corpse that we resurrect every time we engage with them. If neglected, they remain a corpse—rotten, dead, forgotten—to our eternal detriment. The collected wisdom of the ages, disposed with like so much refuse. When engaged with properly, they are made new and live once more to illuminate the world. I can pinpoint when it occurred to me that the old stuff was the good stuff. It happened early on. The Boston Pops has been doing a free outdoor Fourth of July concert every year for nearly a century. Tchaikovsky’s 1812 Overture has always been the headliner. I was five years old when I first saw that performance. A day prior, my dachshund killed my hamster after it had escaped from its cage in the middle of the night. The old man showed me its mangled corpse in a shoe box after my denial. I got to know death. The world was a painful and bewildering place now. Now, here I was.

I sat there on a grassy hill in the summer of 1986 with the old man and his girlfriend. The orchestra played, the fireworks exploded in the night sky over the Charles River and I wept. There was something in the music that was speaking to me, something that I knew, yet could not comprehend. That climax in the Overture—O Lord, Save Thy People—seemed to pay homage to and understand all the suffering that I had so recently met. I didn’t understand it, yet I could feel it. Music is enigmatic in its nature. It speaks to us on a profound, numinous level, but remains forever incomprehensible—permanently on the cusp of something unworldly. It radiated beauty, a window into another realm. There it was, the good stuff. It played on in my head in the coming years, in the midst of the tragedies I was yet to face.

The art that has held strong through the ages has truth and beauty stitched into its essence. There is a reason why the great works of the West have endured. Of course, the public’s attention span is forever shrinking, its eye always fixed on the new and entertaining. There is never-ending demand for the contemporary—new music, new books, new artists, new films, new rehashes of old classics; cheapened and repackaged. The market duly supplies that which our raw senses can gorge themselves upon as our brains pass out on the couch. It’s good that we should seek these things out. It’s good to unwind after a long day. It’s also good when we can find new artists and writers in all this muck— true geniuses worthy of our praise. This is most often not the case, genius is rare and false idols abound. Our minds wilt and fade from a lifetime of passive entertainment and overstimulation. We become dull and argumentative, exasperated and unfulfilled, and we can’t quite recognize why.

The high brow is even more culpable than the low brow. High art is supposed to be the vanguard that carries society forward. It has been corrupted. It has failed us. The books on the year’s shortlists, the films nominated during awards season, the work of the acclaimed artist showing at all the important galleries—most will be erased from public memory within twenty years, if not sooner. We all know that. We know it’s mostly pretense, mere throwaway. It’s no secret, yet we participate. We’re searching hard for the true, the beautiful and the good—something with substance and meaning. We solicit the gods to speak order through the chaos when we go searching in the arts and humanities. We turn over so many stones in pursuit of that shred of brilliance, only to so frequently return with an empty vessel that an awards committee chances to be holding up to the light that year. We have given up. Schopenhauer said that a dozen or so great works are produced every century. Adjusting for inflation, he’s still right.

The ruin of beauty

Beauty is under attack. Since the beginning of the 20th century, it was become a full-on war. It seems to have begun with the art movements that sprung up as a reaction to the First World War—Dadaists, Absurdists, the literati coming out of Paris, etc. While I greatly admire quite a few of the artists and writers who came out of this period, it is widely recognized that these movements mark a line in the sand. When Marcel Duchamp, (whom I consider to be a comedic genius and master troll) signed “R. Mutt” on his infamous urinal in 1917 and put it on display as fine art, he marked the beginning of an era of discord in the arts that we have yet to return from. It’s been said that these various movements were a reaction to postwar disillusionment, but I’m not buying it. History is a slaughterhouse. War and atrocity are an intrinsic part of who we are as a species. They are as much a part of us as the beauty and altruism that we posses. Artistic, architectural, musical and literary masterpieces have all been given to the world during and following the bloodiest wars, pogroms, plagues and famines history could throw at us. We are equal parts devil and angel. Our species is no stranger to mass slaughter. There is something else at play.

Since the middle of the last century, when the postmodern philosophy of thinkers like Jacques Derrida and Michel Foucault flooded the university systems, truth and beauty have become subjective to the point of irrelevance. Everything became open to infinite interpretation. No interpretation was seen as more valid than the other. Those who couldn’t do, taught. Their jealousy got the better of them. Traditional Western art, literature and music have been deconstructed by the schools to the point where they are only seen as symbols of oppression.

The Platonist concept of beauty as communion with the divine has long since been thrown on the rubbish heap and scoffed at. Function and utility have become everything. It now seems almost quaint to admire something beautiful for beauty’s sake. The utility of a thing reigns supreme and we’re not supposed to care about what it looks like. We’re almost seen as shallow or precious if we do. Why would you care about what the buildings in your city look like? What a weirdo. So we have surrounded ourselves with ugly brutalist structures, garish product design and one faceless mass of a city or town after another. They all look the same no matter where you go. We pay for this. Everyone is sad and depressed and they don’t know why. Whatever the reason, it can’t help that they all live in one giant collection of grey and brown boxes, driving grey and brown cars, eating grey and brown food in a grey and brown mood.

Architecture since the beginning of the 20th century has been a detriment to the stream of humanity obliged to live amongst these sizable, Soviet-style edifices. These tedious and vulgar things, this people storage with all sense of aesthetics tossed into the wood chipper. There is a reason why multitudes trek to Paris, Vienna, Venice and San Francisco. There is a reason why Cleveland, Albuquerque, St. Louis and many other municipalities of their aesthetic the world over aren’t travel destinations—they have blight built into the bulk of them. This isn’t to say that the more aesthetically-minded cities don’t have their unpleasant chunks, of course they do. However, a serious effort was put into making them an appealing place to live, a place where people want to stay for the rest of their lives. I know just how crushing it can be to live in a utilitarian city. I live in Los Angeles.

Living here, I have been privy to how crushing it can be amongst bleak and angular beige stucco buildings and fraying palm trees, forever crumbling in the ruthless sun. My eyes have been blinded by trash-strewn concrete, baking in the permanent brightness. My brain has been anesthetized after years of remaining so long in a culture based on the trifles and trends of the modern entertainment industry. I hide a lot.

For a decade, I have walked amongst such wretchedness in some sort of masochistic stab at comprehending it all. Its predominant culture is one that rejects any cohesive aesthetic with hostility, enthusiastically demolishing its history, valuing function over form, and devouring itself. This has a marked effect on the people who live here—the shallow emptiness and sadness the city is notorious for. It’s good that we should have cities like Los Angeles. They show us a lot about ourselves and who we are. Its product is beamed loud into millions of homes and remains in demand. My time here has taught me a lot about human beings.

As an antidote to the sufferings of the disorder that surround me, I have instinctively turned to the great classic works of art, literature, and music. I get lost in the hyperlinked nature of Moby Dick. My fascination with that novel in turn got me interested in Shakespeare and the Bible—both of which are regularly alluded to in the book. As a result, those works have given me great solace and grounding in my life, comforting me in times of trouble and lifting me up when I fall.

The wit and the wisdom of Voltaire, Mark Twain, H.L. Mencken, and Charles Dudley Warner, have shown me what the right mix of humor and brains are capable of. The intricate storytelling, brilliant philosophy and psychology of Dostoyevsky’s Brothers Karamazov completely threw me through a loop from which I have yet to recover. I’m still trying to piece that one together. Bach’s Mass in B minor brings me to tears by just thinking about it. I feel a deep connection to the work. When I think of my final days on this planet, my one true solace is the hope that I will be listening to the Mass as I die. The great works of Bernini, Caravaggio and Michelangelo are forever in my heart. Bach and Mozart are forever in my head. The words of Thomas Wolfe and Hemingway are forever on my tongue.

We give these works new life when they become relevant to us in some way. They are a part of the human adventure; a part of me many others. History is a graveyard filled with the works of those who have come before. Most have deserved their demise; others have perished as martyrs in the fires that decimated the Library at Alexandria. Those incendiary flames burn vividly every time a great artist’s work vanishes to the world. Yet here we are, surrounded by an embarrassment of riches. We are so fat and stupid with abundance. Our ignorance gets the better of us in such a quagmire.

The great works of the ages lie at our fingertips. We should never take our fortune for granted. Read the great books. Understand their messages and make them real. Breathe life into them once again. We live more fully when they live once again. Keep the great Western traditions blooming. Remember beauty, consider style, make it a part of everything you do. Keep an open mind, but have the courage to recognize what is deceptive and have the courage to part with it. The old stuff is the good stuff. It has taken generations to forge. Don’t let it slip like sand from your fingers. Embrace the future by taking heart in what has come before. Do it justice.